Since the last review, stock markets have been driven higher and my recession call was proved to be incorrect. Given this, my defensive positioning has meant that I have lagged both of my benchmarks.

Although the performance has been a bit meh, I’m happy to maintain the positioning going forward which is fairly evenly balanced. Here’s my overall position, including holdings outside the two portfolios: 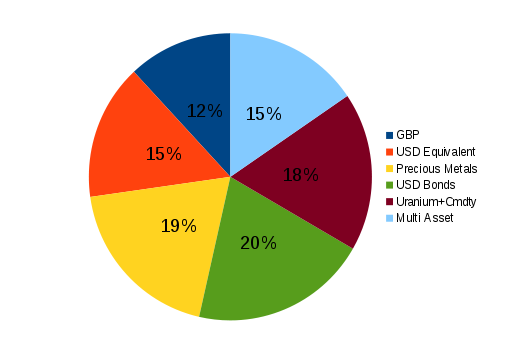 I am pleased with the performance of the Multi Asset Portfolio with a return of 10%. As can be seen above, over a 2 years view it’s keeping pace with the FTSEAS-TR but with significantly less volatility.

During the year I sold out of one of the funds, the Ruffer Investment Company, as its performance was poor during a period of market volatility. Not doing it’s job. The fund is no longer managed by Jonathan Ruffer and now has 3 managers. 2 too many. As well as being expensive in TER terms, it also had multiple holdings of other Ruffer funds whose function, I suspect, was to layer another level of hidden fees. Why pay for a Ruffer gold fund, when they could just buy gold?

During the course of the year, holdings in the Growth Portfolio were increased significantly but performance was poor, losing 5%.

Holdings of longer dated US Treasuries were moved into the portfolio as had made decent gains and I wanted to account for them in my portfolio. Shorter dated Notes / Cash were kept separate.

Gold holdings were sold and replaced by silver which had lagged the gold price rise, with the Gold/Silver ratio around an historic high of 85. I prefer direct Silver holdings to the miners as the historical returns are excellent and it doesn’t have company specific risk, as detailed in my notes on the Currency Debasement trend.

As part of the Electricity Demand trend, a basket of uranium companies were purchased with a bias towards producers. This resulted in a large loss, though a disciplined approach meant that funds were available to average in at lower prices. The uranium market is currently blocked due to anticipated US regulations, but I am hopeful once this is resolved the market will rebound. The longer the situation takes to resolve, the higher I suspect the uranium price will go. The main risk is dilution, though my overweight in producers should help mitigate against this.

A general commodity investment trust on a ~24% discount to NAV was added to the portfolio as part of my Commodity Cycle theme. I expect commodities may fall in a market correction, though as they’re at 10 year lows I suspect they may be quick to rebound. This fund has holdings in Shipping and Gold Miners, which I’m keen to gain exposure to, holding these via a fund also has capital gains advantages. The IT has a small cap focus and has underperformed other commodity funds, which I think have benefited from the ETF Divide. The plan is to buy a larger (& cheaper) fund on general market weakness.

I’m not going to add any meaningful equity exposure at the current level, though this does leave the portfolio unbalanced. The plan is to only ‘bet’ once the odds are clearly in my favour, and not feel obliged to make equity purchases to round off the portfolio. I hope to get the opportunity to do so at some point in the coming year.

We’re currently in the longest business cycle on record. Under normal circumstances, a recession should be on its way, but I need to consider the possibility of that not happening (devaluing currencies either deliberately or accidentally):

“The down-cycle will be different than 2008 and 2000. The FED wont allow markets to adjust to reality, because of its political mandate, so inflation will be the pressure valve that releases all the excess in the system…”

With the above in mind, I’ve started to reduce liquidity and purchase real assets that have not benefited from the last 10 years of asset price inflation. Word on the street is that :

Precious metals are likely to be a safe place to hide out, if the Dutch central bank are to be believed:

“Gold is the perfect piggy bank – it’s the anchor of trust for the financial system. If the system collapses, the gold stock can serve as a basis to build it up again”

Stocks are often considered an inflation hedge too, however “In hyperinflation, stocks can underperform the rate of inflation immensely” :

There appears to be a rush by central banks to buy / repatriate their gold. Poland would rather hold its gold in Warsaw and risk it being stolen by Russia, than keep it in London. It seems the probability of some sort of restructuring is non-zero and deckchairs are being moved accordingly.

Overall, I’m happy with my idiosyncratic positioning in areas I consider to be either undervalued or defensive. In not having exposure to the broader indices, my performance is likely to differ markedly to most other portfolios. I had hoped that holding uncorrelated assets would smooth out my performance, but with a partially constructed Growth portfolio that hasn’t been the case.

This year my investment allocation has not worked in my favour, but I’ll continue to follow my own process and not run with the ETF herd. I consider ETFs as a momentum play, fine when the general direction is positive, but could get messy on a pull-back as everyone rushes for the exit.