This details the set-up I performed to dual boot windows and Linux with full disk encryption (LUKS encrypted root/home/swap, though not boot - Evil Maids don’t scare me!)

I had initially planned to install Debian, though settled for Linux Mint as Debian still didn’t support Secure Boot, and after some thought, I decided to go ahead with Mint as it’s been a straight forward setup whenever I’ve used it in the past.

Setting up the encrypted volumes

The first set I took was to run GParted from a Live USB stick and add the partitions I required, four in total: boot, root, swap, home. At this stage all unencrypted: 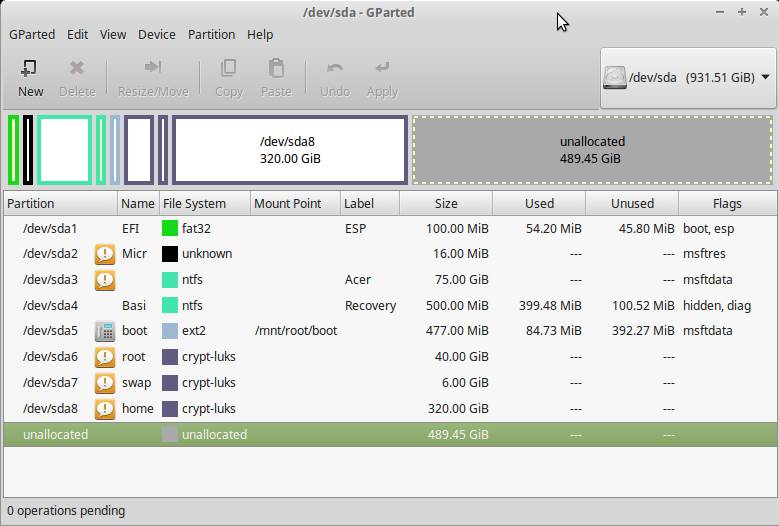 As the boot partition remains unencrypted, I formatted only the partitions that were to be encrypted as follows (as superuser):

I then opened these encrypted volumes as follows:

This creates unencrypted entries with corresponding names in /dev/mapper/. It’s these that should be mounted, should there ever be an issue and the data needs to be retrieved. With the devices unencrypted, I then created their filesystems

I then proceeded to install Linux using the install option in the live USB. When the Installation Type screen appears, “Something else” should be selected and the appropriate unencrypted volume used (/dev/mapper/….) to install home, root and swap mount points:

Then continue with the install process. Once complete, choose “Continue Testing” rather than Restart

The following directories need to be mounted, using chroot as we’re running from our Live USB:

The crypttab file needs to be created, to tell the system which volumes are encrypted.

I used the UUIDs to identify the partitions to be. A sudo blkid command was used to view the UUIDs of each volume. Note that the entries I was interested in all stated “crypto_LUKS” which corresponded to the devices we encrypted (sda6, sda7, sda8 in my case). Gottcha: Don’t make the mistake of using the UUID for the line that states Swap (without the crypto_LUKS bit, it’s the sda7 line that was needed)

The crypttab file can be created using vi /etc/crypttab and should be edited as follows (Using UUIDs from above):

The additional swap entry at the end of the swap line means mkswap is ran after boot, so nothing in the swap can survive a re-boot.

The initramfs is a boot filesystem image, used to mount root (Or something like that). I found that I had to regenerate locale as otherwise I got an error relating to no support for en_US.utf8

If the headers in the LUKS volumes become corrupted, then the partition will become unusable. It is a good idea to have a backup to restore from. This was done as a root user as follows:

Um, well, no. On re-booting, I was taken straight to the Windows boot manager instead of grub and then Windows started. On looking in the Bios (Or whatever it’s called these days

) there was no Mint entry to be seen!

The first step to fix was to boot using the USB Live image, and run efibootmgr -v which showed entries for Mint and Ubuntu (I think it uses Ubuntu, as that has the signed key for secure boot). The Ubuntu entry was above the Windows Boot Manager, so it should have worked….

After much head scratching, I found that the BIOS had feature to select a UEFI file as trusted. Once I selected the ubuntu file as trusted, it then appeared in the Bios. I could then ensure this was ahead of the Windows Boot Manager in the boot order - which worked!

This behaviour appeared to be specific to my make of laptop (Acer), with many people complaining about their buggy BIOS.

Finally I could then boot into my encrypted Linux, though was forced to enter identical passwords for both root and swap. The home partition was automatically decrypted with the root. The next task to to update the setup so as only one password was required.

To do this, I initially added a keyfile to the Swap crypttab entry. I later found out that the swap wasn’t working as viewing the partition in GParted showed it as unknown rather than luks_crypt. Executing cat /proc/swaps showed nothing and doing a top confirmed my swap was was 0.

I think what had went wrong was that on re-creating the swap, the UUID had got trashed. I booted into the Live usb again and recreated the swap area manually:

I them re-performed the mappping/chroot operations and edited the swap line in the crypttab file to use the new UUID and regenerate a password:

This uses a random password, which is discarded at shutdown, so no need to enter a password manually.

As I suspected the UUID was previously being trashed when the swap was re-created, I added the offset=2048 which means there is a 1Mb offset used when re-creating the swap and thus the original UUID/LABEL is maintained rather than wiped since they live in the initial 1Mb header. As the UUID will remain unchanged, the crypttab entry is always valid and the swap should be correctly mounted.

After the above steps, I again updated the locale and ran update-initramfs -u. On rebooting, it appeared to work