The output of the tool is a single html page that contains all of the articles in date order, with no method to mark items as read/unread. This may sound like a -ve, though I have an idea that if I can’t get though all teh article to read in one day, then I’m suffering from information overload and it may force me to take action.

This was quite strightforward, basically install and then add feeds into the config file. There are many settings in there which can be tweaked. To run, I just execute:

This outputs an html file, which can then be copied only my local nginx server I had set up. This process would probably be scripted, amd then put on a CRON. 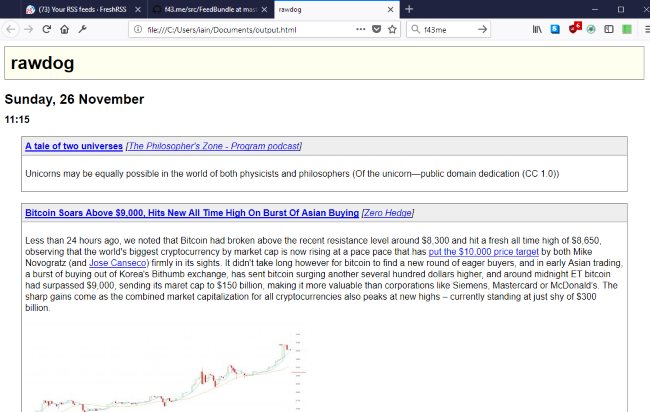 The tool has many plug-ins that allow the feed to be tailored to your taste. Stuff like applying filters to disregard articles containing certain words. Group by feeed instead of date. Execute commands before/after fetching feeds. The plug-ins are written in python and quite understandable and API well documented, so I could write my own if I think I need a custom action.

One plugin I was playing around with filtered articles. It worked well, all I had to do was update the config file as follows:

I’ll probably keep playing around with this, though not sure I’ll use it.